For an optimal use of photovoltaics, shading of the modules must be avoided. Partial shading on the module is sufficient to result to a significant decrease in performance. It is therefore essential to take into consideration, already at the planning stage of a plant, the possibility that other buildings, trees or panels themselves (for example panels willing to "shed" on flat roofs) may cause even partial shading of the photovoltaic surface. The possible shadings are:

Distant shading
Distant enough to cast a shadow on the entire system almost instantly (due to horizon).

The partial shading must be absolutely avoided as it will lead to plant or string of modules power losses that are proportionally much higher than the surface of the shade. In the case of a system with one inverter per string, the connection has to be made in parallel to the most important shade: for example, if a tree is projected onto a PV façade during the day, the connection must be made vertically.

Temporary shading/accidental
These can be of the leaves or dirt on the modules of the system.

In the case of partial shading, the shaded cells function as heat sinks of the power generated by the module. This phenomenon, known as "hot-spot", causes an increase of the temperature of the module which can reach values ​​above 100°C.
To avoid damage to the cells obscured, by-pass diodes are incorporated in order to allow the flow of current and avoid that this passes through the cell obscured. Ideally it would require a by-pass diode for each cell, in reality they are present on each cell string. 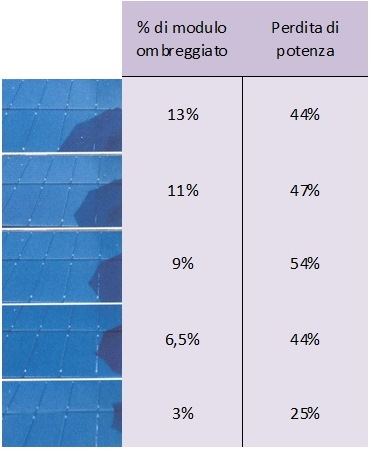