Grid parity is the point at which the electricity produced by alternative (renewable energies ) has the same price as that of traditional energy (electrical grid).

In 2011, EPIA presented the historical trend and future developments in the price relative to the cost of conventional electricity (usually produced from non-renewable sources) than the cost of photovoltaic electricity. 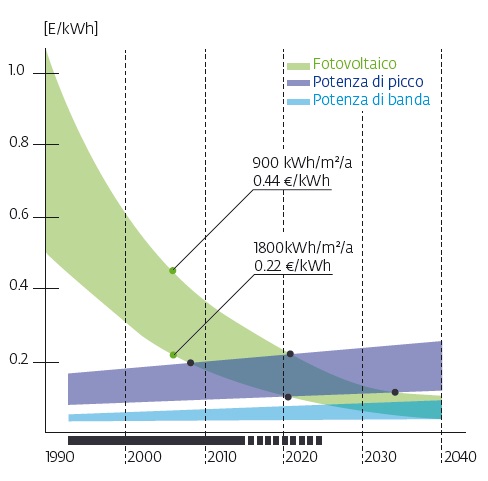 The PV curve (green) is an interval whose endpoints are the costs of photovoltaics respectively for the north (900kWh/m2/year) and south Europe (1800kWh/m2/year).
The cost of the conventional electrical energy is divided into a price for peak power (during the day) and band power (constant during the entire period of the day). In south Europe, solar electricity is already competitive with peak electricity. Less sunny areas, such as the north-central Europe, will reach grid parity by 2020.
The black line of the graph indicates that a program of financial support may be necessary in some markets, up to about 2020.