The principal of operation of a photovoltaic cell can be generally described as follows:
The basis material of solar cells is a semiconductor, a special type of materials in which the bound electrons may become free electrons when they absorb solar energy (photons). This is called photo-electric effect. When a bound electron is free, a “hole” is left behind, creating what is referred to as an “electron-hole pair”.

The creation of free electron-hole pairs is only the starting point to make a photovoltaic cell, since they alone create only free charges, but not the potential difference that allows them to circulate in an external circuit as current and giving electrical power. Therefore a second process, called doping, is necessary.
In crystalline Silicon (c-Si) semiconductors, doping is accomplished inserting a few quantity Boron (B) atom to the c-Si structure, creating the so-called “p-type” Si, or a few quantity of Phosphor (P), creating the “n-type” one. Having 3 valence electrons (rather than the 4 valence electrons of Si) B is able to get a free electron when surrounded by Si atoms and is therefore called “acceptor”. On the other hand a P atom has 5 valence electrons and releases an additional electron when surrounded by Si atoms (being therefore called “donor”). 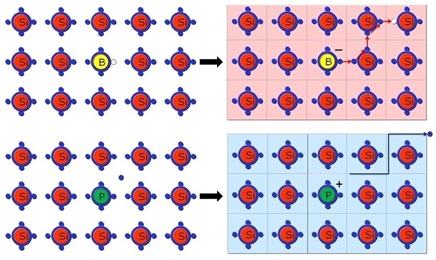 When putting the p- and n-type side by side, the so-called “p-n junction” is created: as a consequence a barrier generates that is able to push the free electrons and the free holes at the opposite sides of the junction. 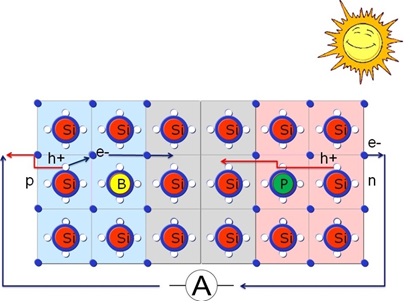 The photons of the incident solar energy on the solar cell have enough energy to break the electron-hole pairs and render them free. The free electrons close to the electric field are sent to the n side and the holes to the p side. At this point an external load is needed in order to enable the electrons to flow to the p side and recombine with the holes there. 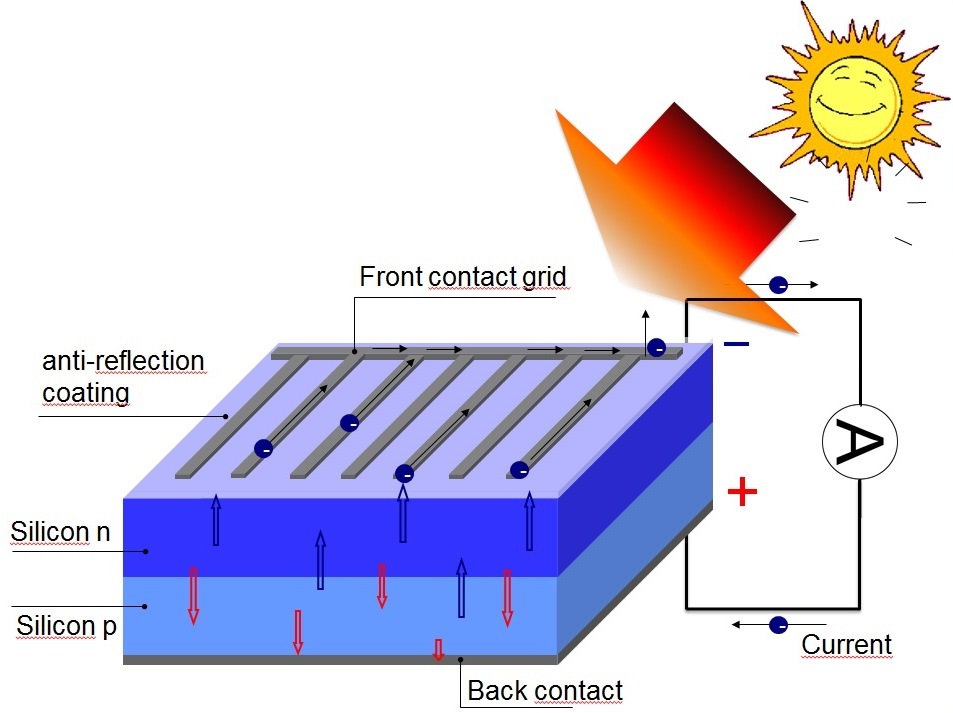 There are different PV technologies have different characteristics depending on the type of cell or technology used. Among these, the most common are: mono-crystalline, multi-crystalline and thin-film (amorphous silicon, micromorphous, CIS, CdTe).

Polycrystalline silicon (mc-Si)
Production of multicrystalline silicon cells is less expensive. For their preparation, liquid silicon is pured into molds and then cut into slats. The cell has an uneven blue appearance. The spotted and shiny surfaces are a characteristic of it's multi-crystalline nature.

Amorphous silicon (a-Si)
The amorphous silicon is not arranged in crystal structures and the cell is characterized by a thin semiconductor layer (thin film). It has a lower cost of 30-40% than the mono and polycrystalline silicon but with lower efficiencies.

Copper indium selenide (CIS) and copper indium gallium selenide (CIGS)
Both have efficiencies higher than amorphous silicon, but are not diffused because of their high cost. Two disadvantages of this type of technology is the limited availability of indium (In) and the traces of cadmium (Cd) and other toxic materials in production.

Cadmium telluride (CdTe)
New semiconductor with yields higher than those presently diffused. This technology has a low cost of production and a good-Energy Pay-Back Time. Its disadvantages are the same of the previous technology; the availability of indium (In) and the traces of toxic materials (such as cadmium) in production.

Multijunction cells
In order to increase the overall efficiency of the cell, this type of cells is made with multiple layers of semiconductor material with different energy gaps (different spectral response). This way each layer can optimally absorb photons of a certain energy range.

Third generation
In order to increase the overall efficiency of the cell, this type of cells is made with multiple layers of semiconductor material with different energy gaps (different spectral response). This way each layer can optimally absorb photons of a certain energy range. The field of organic solar cells includes all those devices whose photoactive part is based on organic compounds of carbon. The basic structure of an organic cell is called "sandwich" and is composed of a substrate, glass or flexible polymer, and one or more thin films, which contain the photoactive materials, interposed between two conductive electrodes. The most efficient organic cells, inspired by the process of photosynthesis, are using a mixture of materials in which a pigment absorbs the solar radiation and the other components extract the charge to produce electricity. The range of pigments that can be employed include those of vegetal base, polymers and synthesized molecules. The range of organic solar cells is wide and at different stages of research and technological maturation and includes, in summary, the "dye sensitized" cells (whose photoelectrically active part consists of a pigment, from titanium oxide and from an electrolyte), organic (whose active part is totally organic or polymer), hybrid organic / inorganic and hybrid organic. The latter are particularly interesting for the bio-compatibility of the photoactive material used in some laboratory prototypes. Maximum efficiencies of 10-12% and life time of several years have been measured in the laboratory for DSCC cells. In the construction of the panel it is possible to use some low cots techniques, like the ink-jet printing, according to which the photovoltaic material can be deposited on large areas and with very low costs, in liquid solution as real inks in free air, reducing the environmental impact and the cost of production. Several components DSCC and polymers are already in production and available on the market. (Fonte: www.chose.uniroma2.it)

Luminescent solar concentrators (LSCs)
The LSCs (acronym of Luminescent Solar Concentrators) are made from sheets of transparent material (plastic or glass) within which are dispersed fluorescent dyes that absorb a part of the solar light and emit it in the inside of the plate. The emitted radiation, by exploiting the phenomenon of total internal reflection which is applied in optical fibers, is led toward the thin edges of the plate where it is concentrated on solar cells of small surface, that convert it into electrical energy.